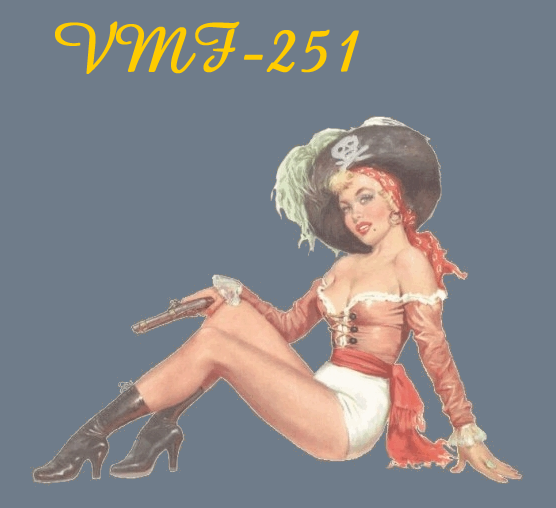 Welcome to the headquarters of VMF-251, the Buccaneers! Wipe your feet, pull up a stool and have a drink at the pilot's lounge. Have a look around and get to know us a little better, and maybe you might decide to join us.

VMF-251 was founded in November of 2006. We are a fighter squadron "officially" flying for the Rooks in Hi-Tech Creations' online WWII air combat simulator Aces High II. Our objective is to simulate a typical United States Marine Corps fighter squadron in the South Pacific during the Second World War. In addition to improving ourselves as individual players, our goal is to develop solid cooperative tactics between wingmen within our own squadron, and with other players in the online arenas.

We primarily fly in the two Late War Arenas, and may in the future participate as a squad in special events and historical scenarios. We choose not to limit ourself to one aspect of playing the game, so while we may join the general furball one sortie, the next may find us involved in actions supporting base captures. Our sorties run the range of those flown by our historical counterparts who fought in the South Pacific, including fighter sweeps, bomber escort, combat air patrol and ground attack. Above all, we're a group gathered from throughout the world who enjoy flying together and share an enthusiasm for these legendary warbirds.

Our primary ride for official squadron operations is the Chance/Vought F4U-1A Corsair, though at times circumstances may require other aircraft to be used. While some of our members fly the Corsair almost exclusively we neither expect nor demand that our members restrict themselves to this one aircraft under free-flying away from the squadron. Even then we're always on the lookout for each other, and still continue to fly together even outside of official activities.

We are still a young squadron always on the lookout for fellow Corsair enthusiasts interested in more than just the general arena experience. As we continue to grow we hope to branch out, and our next goal is to form a second squadron as part of plans to ultimately develop a full Air Group. These are plans for the distant future, but hopefully ones that will one day be realized.

Its distinct silhouette makes the F4U Corsair a favorite of airshow enthusiasts. Its speed, firepower, maneuverability and durability made it one of the greatest combat aircraft in history.

The F4U Corsair was developed by Chance/Vought in the late-1930s to provide the United States Navy with a new high-altitude interceptor, mating what was then the most powerful aircraft engine available--Pratt & Whitney's 2000hp R2800 Double Wasp--into the smallest airframe that could accomodate it. The resulting aircraft was the first fighter to exceed 400mph in level flight at altitude under a normal combat loadout. In order to take full advantage of the power output of the massive engine, the XF4U was fitted with a massive (for a fighter) 13' propeller. However because of the narrow diameter of the aircraft's fuselage (compared to other fighters that would mount the R-2800, such as the Republic P-47 and Grumman F6F, both of which possessed a deeper fuselage) the landing gear would not provide sufficient ground clearance for the propeller to spin. Rather than lengthening the main landing gear struts, which would make them too fragile and unsuitable for carrier use, Vought instead altered the wing design, angling the inner part of the wing downward at a 45-degree angle before turning upwards again in a normal dihedral. This distinctive design, dubbed an "inverted gull wing" provided the Corsair with the necessary ground clearance for the propeller without the need for excessively long landing gear struts, and resulted in one of the most unique aircraft designs of the Second World War.

Initially, the Corsair mounted one Browning M2 .50cal machine gun in each wing, and a third in the engine cowling accompanied by a single Browning .30cal machine gun. However as development continued the evolving air war in Europe proved that such armament would be insufficient, and the F4U's firepower was upgraded to six of the Browning M2s, three in each wing (this would be the standard armament for most American fighters, and the majority of the Corsairs that saw action in WWII). As a result of the increase in armament, the wing mounted fuel tanks were considerably reduced in size, forcing Vought to increase the size of the main fuselage tank. This in turn pushed the cockpit further aft, resulting in the Corsair's distinctively long nose that helped give rise to the nickname "Hog."

In spite of its capabilities the F4U nearly failed to meet its most important function: That of a carrier-borne fighter. The long nose made visibility poor on the ground and during landing. Weak landing gear and heavy bounce made controlling touchdown difficult. However the Corsair would become most notorious for its difficult handling under low speeds. The massive amount of torque generated by the F4U's engine easily led to violent and sudden departure behavior as the left wing stalled first and caused the aircraft to enter a spin, which if not corrected could quickly become unrecoverable. Adding to the severity of the Corsair's stall behavior was that this frequently occured at low altitudes during landing approach. The abysmal accident rate among inexperienced pilots earned the aircraft its infamous sobriquet "Ensign Eliminator." The Navy declared the Corsair unfit for carrier duty and relegated them to land bases. There couldn't have been any better news for the Marine Corps aviators fighting against the Japanese in the South Pacific.

The F4U Corsair first saw combat in February, 1943, and in spite of its teething problems quickly proved its superiority over its primary opponents: the Japanese A6M "Zero" and Ki-43 fighters. The Corsair was the first fighter aircraft available in large numbers in the Pacific that all but out-classed the highly agile Zero. She was faster, more rugged, more heavily armed, and could easily outdive and outclimb her opponent. The Corsair possessed a remarkable rate of roll, the controls were responsive and the aircraft was exceptionally maneuverable at high speeds where her princiale opponents began to suffer control stiffness. By the end of the campaign in the Solomon Islands and throughout the South Pacific she had become the primary fighter of the United States Marine Corps and was beloved by even her Navy pilots. The legendary VF-17 "Jolly Rogers" created more aces than almost any other unit in the Pacific Theater with their Corsairs during the bitter fighting of the Island-Hopping campaign, and proved that with proper training the Corsair could INDEED operate successfully off a carrier deck. The Corsair is even more readily identified with the famed Black Sheep of VMF-214, and the legendary (and equally controversial) Gregory "Pappy" Boyington. The Corsair would achieve a kill ratio of 11:1 during the Pacific War, and would earn the chilling nickname "Whistling Death" due to the distinct sound of air whispering through the oilcoolers in the wings (popularly attributed to the Japanese, but possibly coined by American reporters for propaganda).

The Corsair would continue to see service after the war, and became one of the main close air support aircraft of the Korean War due to her capability of lifting an impressive load of ordinance. The F4U saw its last combat as late as the 1960s during the "Soccer War" between Argentina and El Salvador, and had one of the longest production runs of any front-line fighter aircraft.

By the time she left service, the Corsair had established itself as arguably the best fighter aircraft of the Second World War, and certainly one of the greatest fighters ever to face an enemy in battle.